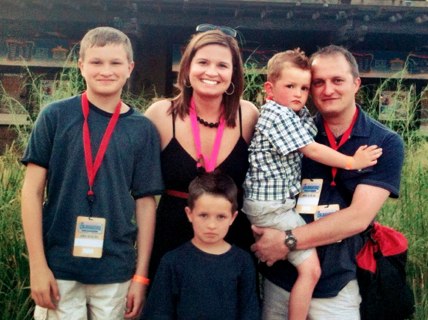 ianera. That’s me. Or, Andrea for anyone who is 2 years or older.

When I was little, I used to introduce myself as ianera. Since I could not articulate my words (I was like a year old people, don’t judge), I slurred them all together. Like little kids and highly intoxicated people do.

Basically I was adding the “i” before my name before iCarly. I’m that cool.

I’ve never called myself ianera as an adult. I’m sure people have called me “heyanera” though as an adult since they were likely intoxicated. I love them too.

My mom still calls me ianera to this day. And by the way, I had about fifty billion other blog names that would have been AWESOME. But, everyone used those. So, instead I chose an original one that only I could obviously use. Because that’s me. I’m original.

What can you expect here? An authentic me. I’ll write sporadically and share what’s on my heart.

P.S. the photo above is really old. I’m a professional photo procrastinator. This will surely be the year that we get a family photo. Or not.

P.P.S I also run this site, help with this site and this one is ALL me too.

Andrea, aka "ianera." A name given to me by my mom. She still calls me this. I never outgrew it I guess. Welcome to my personal place on the interwebz. If you're bored, you can read more about me here.